Czech conservator may have found remains of St. Agnes of Bohemia

Agnes of Bohemia was a princess of royal blood yet she refused a politically arranged marriage – as was the order of the day – and went into a nunnery, devoting her life to caring for the ill and needy. More than seven centuries after her death she was canonized by Pope John Paul II, just days before the 1989 Velvet Revolution. The twentieth anniversary of her canonization comes amidst speculation that restorers may have uncovered her long-lost remains.

Earlier this week conservator Denis Anfilov announced that he had most likely found the remains of St. Agnes in the church of Saint Haštal in Prague’s Old Town. He claims that a radar scan had revealed a long casket and two metal items, which might be a royal seal and an abbess' cross. Geologist Leo Vrzal points out that there is no evidence that this is where the actual remains of Saint Agnes are. He says, “We cannot confirm this as of now. Some kind of hollow space has been discovered, but it could be whatever.” 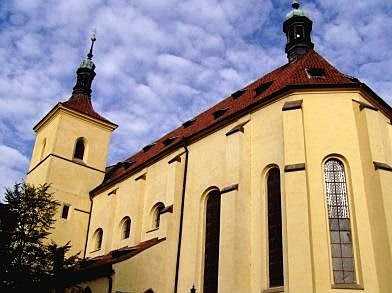 Agnes of Bohemia, born in 1211, was the youngest daughter of Czech king Přemysl Otakar I and Constance of Hungary. Inspired by the teachings of St. Francis of Assisi, she abandoned her birthright and went into a nunnery. In 1234, she founded the St. Francis asylum and hospital in Prague and later became the founder of the only brotherhood in the Czech Lands, the Order of the Knights of the Cross with the Red Star. She died on March 2nd, 1282.

Seven centuries later - on November 12th, 1989 – she was canonized by Pope John Paul II, the first Czech to be declared a saint since Saint Nepomuk‘s canonization in 1720.

The canonization took place in Rome, and although it was frowned upon by the communist regime, some 10.000 Czech Catholics braved the anger of the authorities to attend the event in Saint Paul’s Cathedral. Some say that St Agnes’ canonization heralded better times for the nation. Theology professor Petr Kubín says her gentleness was symbolic of the bloodless revolution: “For the Czech nation, she is forever an exaple of Christian mercy and Christian poverty and she is now also a symbol of the Velvet Revolution, because she was canonized only a few days before the Velvet Revolution and she added the Velvet to this revolution moment.”

Agnes was buried in the church of the St. Francis monastery but her remains where later moved, allegedly by the nuns, who were escaping Husite attacks. They were hidden so well, they were never found. This may have contributed to the delay in her canonization, says Martin Weis, the head of the faculty of Theological History at the South Bohemian University. “The remains of Saint Agnes are so well hidden that we couldn’t find them to this day, and this may be part of the reason why the process of canonization and its first phase, the beatification, didn’t begin until the 19th century.”

Prague Archbishop Miloslav Vlk, the Czech Catholic Church primate, must give his consent to have the grave explored. His spokesman Aleš Pištora said the cardinal had already voiced his consent and would soon confirm it in writing. Finding the remains of one of the country’s most prominent saints would be an important discovery in more ways than one. Legend has it that once the remains of Saint Agnes are found, the Czech nation will experience an era of good fortune, brotherly love and abundance.