Remarkable new details were revealed this week from the discovery of a medieval grave in County Donegal in Ireland.

One of the most notable is that archaeologists have come across the remains of a young woman buried around the year 800 AD who underwent brain surgery. She had a large trepanation on the top of her skull—a hole where a circular section of skull had been surgically removed. It is not possible to be sure why the surgery was undertaken, but Michael MacDonagh, a senior archaeologist with the National Roads Authority says, "We know that she survived the operation as the skull shows signs of bone growth after the hole was cut into it."

News of these findings were presented at Science Week Ireland. They detail some of the medical information turned up by archaeologists and scientists on the remains of up to 1,300 people whose graves were discovered alongside an unknown medieval church on the banks of the river Erne at Ballyhanna.

Evidence of tuberculosis (TB), cancer and cystic fibrosis were found among these people. Another fascinating discovery remains of a disabled man whose legs had fused together, as a result of multiple exostoses, also known as bumpy bone disease.

“This man lived into his 30s which was a typical lifespan then. He would have had to be carried everywhere and he was obviously buried formally and with respect, which tells us something about how medieval society treated people with disabilities,” Mr MacDonagh added. 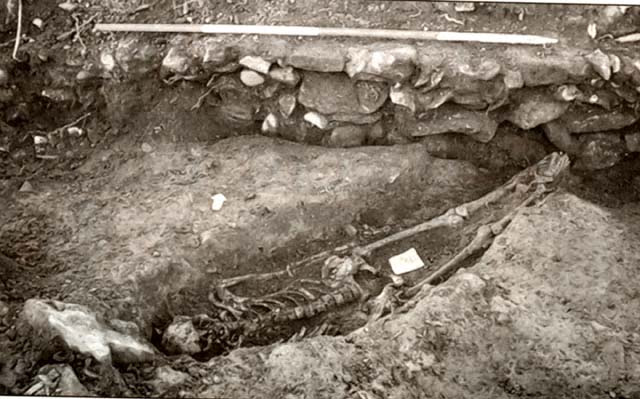 A total of 869 adult skeletons have been examined and detailed information has been recorded on sex, age-at-death, height and any evidence of pathological changes or trauma-related injuries present on the skeletal remains.

There was widespread evidence for trauma, ranging from the relatively minor, such as standard bone fractures, to trauma that was likely to have been fatal, such as sword wounds to the head.

The skeletons of 427 children have also been examined, and reveal signs of poor health and diet, including signs of iron deficiency anaemia and possibly even scurvy, which is due to Vitamin C deficiency and is commonly associated with medieval mariners.

This burial site, which was discovered in 2003, was used from the 8th to 16th centuries. It seems to have been forgotten since then, and was only found when road work began in the area.

Earlier this month, we reported on a similar find in County Kildare.