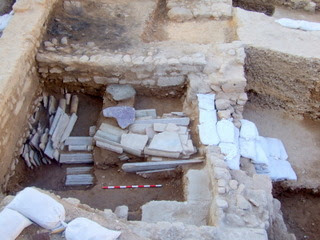 In an excavation that was recently conducted c. 100 meters north of the Old City wall of Akko, a unique find was discovered from the Crusader period (the thirteenth century CE) – a hoard of 350 marble items that were collected from buildings that had been destroyed.


The hoard was found within the framework of an archaeological excavation conducted by the Israel Antiquities Authority before theAkkoMunicipality began building a new structure to house classrooms in the Hilmi Shafi Educational Campus.

According to Dr. Edna Stern, excavation director on behalf of theIsrael Antiquities Authority, “We have here a unique find, the likes of which have never been discovered in the Kingdom of Jerusalem in the Crusader period (the capital of which was Akko). During the archaeological excavations we came upon a cellar that was sealed by collapse comprised of building stones and charred beams. Beneath the cellar floor a hoard of c. 350 marble items and colored stones was discovered, including two broken marble tombstones with Latin inscriptions (one belonging to a person by the name of Maratinus), flat marble slabs and marble tiles of various sizes and colors, etc. Some extraordinary items were also found, among them a large stone cross and a large fragment of porphyry (a rare precious purple stone, which has been the color of royalty from Roman times). The quality of the marble is excellent and it was undoubtedly imported from abroad.” 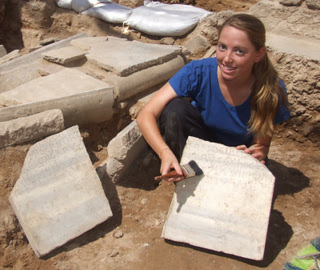 Dr. Stern added, “Everyone knows that Crusader Akko was an important center for international trade and the marble hoard reflects the magnificent buildings that were erected here but have not survived, as well as also the commerce and the wealth of its residents. Just as there is a trend today to incorporate wooden doors from India or roof tiles from old buildings in Italy in modern villas, at that time they used to integrate ancient architectural items from the Roman and Byzantine periods in their construction. And just like today, people at that time also yearned for the classic and the exotic. We know from written sources that they bought and sold such stones, which were exceptionally valuable, to be reused in buildings. We can assume that the owner of the hoard, whether he was a merchant or he collected the stones for his own construction, was aware of impending danger and therefore buried the valuable stones until such time as the tension abated."

However, the cache of stones was not sold in the end. According to Stern, “We can reasonably assume that the collapse that was found above the hoard is evidence of the building’s destruction in 1291 CE, when Crusader Akko was conquered by the Mamluks and was completely devastated."

The marble hoard was removed from the field and transferred to the Israel Antiquities Authority for further study.