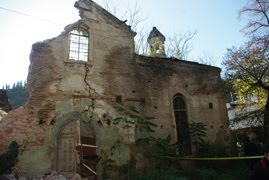 A major section of a 14th century Armenian church in Tbilisi, Georgia, collapsed Wednesday evening, after years of neglect by the authorities to repair the historic structure, reported the Georgian Diocese of the Armenian Apostolic Church on Thursday.

The St. Gevorg of Mughni Church, built in 1356, had been entirely rebuilt in 1756. It is made of brick and its architectural typology is that of a cross within a rectangular perimeter, with four free-standing supports. The church had been closed for years, owing to the structures deteriorating condition. Locals say the recent rains further exacerbated the damage to the church.

The medieval church had been operating as a museum of folk art until the mid-1980s. By 1990 it was no longer a museum and its interior lay in ruin. The vestibule attached to the western facade of the church was destroyed in May, 1991.

“The Georgian Ministry of Culture, Monuments Protection and Sports should bear the responsibility,” the Diocese said in a statement Thursday. “All this creates an impression that by failing to solve the issue of returning the churches to the Armenian Diocese, the Georgian Patriarchate and authorities do not pay proper attention to the preservation of Armenian churches, and intentionally destroy important monuments of Armenian culture.” 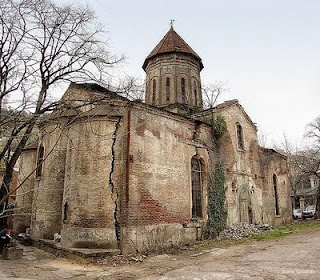 Georgian authorities had pointed to large cracks in the church’s walls as an excuse to demolish the church instead of repair it. The district governor in Tbilisi Thursday promised to allocate funds for reconstruction of the church.