Syrian archaeologists have discoverd cemetery dating back to the Roman era at the village of Ma'rin al-Jabal, southeast of the city of Hama in central Syria.

According to a report in the Global Arab Network, Chairman of Hama Antiquities Department Jamal Ramadan said in a statement that the excavation works led to the discovery of an old burial site built of calcium stones, including six tombs and 45 ceramic lamps. He indicated that the studies on the archaeological findings proved that the cemetery dated back to the Romanian era and were re-used in the Byzantine era.

Head of the Syrian archaeological national mission Abdullah Bassal said that the cemetery is unique since it was built of calcium stones and its ceiling was a semicircle dome where most of the discovered cemeteries were dug in stones.

Two other discoveries were also recently announced. In the town of Tal Damer, northern al-Raqqa, to the northeast of Syria, there was discovery of a big building consisting of four rooms, wide courtyard and water well. The archaeologists said that many of their findings date back to the Abassids era. 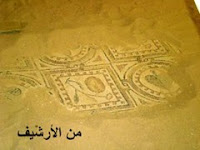 Meanwhile a mosaic painting dating back to the Byzantine Era was found at Tal al-Kesra Site, to the west of Deir Ezzor. The painting, found in a Byzantine bath, dates back to the 5th century. It is the first of its kind to be uncovered in the eastern region and the middle Euphrates valley, he added. The painting's two main scenes depict a duck and a pair of fish facing each other. It also contains geometric and vegetal ornaments