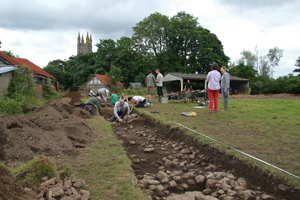 A recent archaeological excavation to discover the remains of the lost manor of North Hall in Widecombe-in-the-Moor has been heralded a success. The community excavation was led by Andy Crabb, Archaeologist for Dartmoor National Park Authority.

Andy Crabb said: ‘In five days of digging, well over 50 individual volunteers helped out - a fantastic achievement. The volunteers came from Widecombe village, the Widecombe Local History Group and from the wider local community. Despite some wet summer weather at the start of the dig, all seemed to greatly enjoy their experience of archaeological excavation with many returning again and again throughout the week. Groups of local school children from Widecombe-in-the-Moor and Ilsington Primary Schools also enjoyed visits to the site and helped out with the digging.’

The dig was the culmination of many years of research by Peter Rennells of the Widecombe History Group who has been a leading light in investigating the history of the manor and its location. The excavation revealed that soon after the site was abandoned it was extensively robbed for building stone. Evidence for this came from the spreads of stone rubble, layers of mortar and broken roofing slates discovered. The foundation courses of a substantial wall 1.5m wide and made of clay-bonded granite indicate that a large building was once present on site. It is probable that the stone was collected from the manor site in order to re-build Widecombe Church Tower in the 1640s.

The stone was also probably used in the construction of other buildings in the area. Other interesting discoveries include an earlier boundary that surrounded the site. Underneath the existing moat bank an earlier sequence of ditch, bank and possible palisade was identified. A small piece of high status 15th century pottery from Islamic Spain was also found, suggesting the site was once home to wealthy and well connected people.