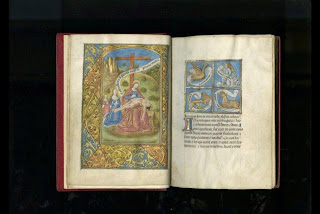 The book before me is huge and heavy, bound, not in paper or cardboard, but with planks of solid oak, held together by thick cords. It looks like a prop from a fantasy film. It’s actually a Latin dictionary, published in the early 1700s.

It’s normally held in a vault in the Bruce Peel Special Collections Library, underground at the University of Alberta. The library has no record of when or how this book arrived in its collection. But as old as the dictionary appears, it hides a secret far older.

Inside the heavy oak cover is a parchment liner. Other pieces of the same parchment are stuffed into the spine, to bind the book block together. The parchment wrapper is far older than the dictionary: a medieval manuscript, hand-written on calfskin vellum.

Erik Kwakkel, 42, is a codicologist — an expert on books as physical objects — at Leiden University in the Netherlands. His particular expertise is the history of 12th and 13th century manuscripts. He’s in Edmonton this month as a distinguished guest lecturer at the University of Alberta — and at the moment, he’s leading an enthusiastic group of students and staff on a treasure hunt.

Click here to read this article from the Edmonton Journal