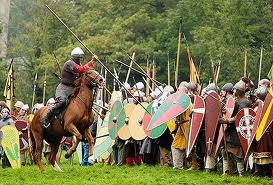 A re-enactment of the Battle of Hastings on what is believed to be the original battlefield has been cancelled because of torrential rain.

English Heritage said for safety reasons the event could not go ahead because of unacceptable levels of mud on the battlefield and public areas.

Sunday's re-enactment marked the 946th anniversary of the battle when William the Conqueror defeated King Harold.

Hastings Borough Council said the cancellation was a disappointment. "It is understandable but it is a real shame because the organisers put a lot of time and money into organising and advertising it," said spokesman Kevin Boorman.