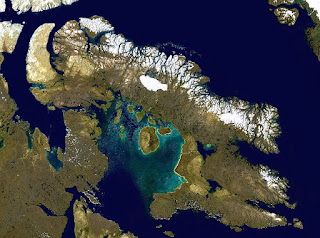 For the past 50 years—since the discovery of a thousand-year-old Viking way station in Newfoundland—archaeologists and amateur historians have combed North America's east coast searching for traces of Viking visitors.

It has been a long, fruitless quest, littered with bizarre claims and embarrassing failures. But at a conference in Canada earlier this month, archaeologist Patricia Sutherland announced new evidence that points strongly to the discovery of the second Viking outpost ever discovered in the Americas.

While digging in the ruins of a centuries-old building on Baffin Island, far above the Arctic Circle, a team led by Sutherland, adjunct professor of archaeology at Memorial University in Newfoundland and a research fellow at the University of Aberdeen in Scotland, found some very intriguing whetstones. Wear grooves in the blade-sharpening tools bear traces of copper alloys such as bronze—materials known to have been made by Viking metalsmiths but unknown among the Arctic's native inhabitants.

Taken together with her earlier discoveries, Sutherland's new findings further strengthen the case for a Viking camp on Baffin Island. "While her evidence was compelling before, I find it convincing now," said James Tuck, professor emeritus of archaeology, also at Memorial University.