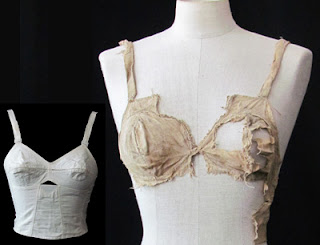 The discovery of female undergarments from the 15th century is making international headlines. Now more details are being released by the University of Innsbruck.

The archaeological research was carried out at Lengberg Castle, East Tyrol, Austria, beginning in July 2008, when a renovation project for the medieval castle was stated. During the research a vault filled with waste was detected in the south wing of the castle in a room on the 2nd floor. The fill consisted of dry material in different layers, among them organic material such as twigs and straw, but also worked wood, leather – mainly shoes – and textiles.

The building history, as well as investigations on construction techniques and the archaeological features heavily suggested a dating of the finds to the 15th century, when another level was added to the castle by order of Virgil von Graben. The reconstruction is mentioned by Paolo Santonino in his itinerary, who also gives us a short description of the castle and mentions the reconstruction and the consecration of the castle chapel by Pietro Carlo (1472–1513), Bishop of Caorle, on October 13th 1485. The vault spandrel was most likely filled with waste during the addition of the 2nd storey as isolation or to level the floor.