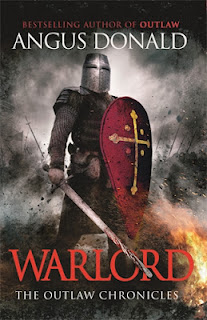 Best selling historical novelist Angus Donald from Tunbridge Wells is now on the fourth volume of his series concerning the exploits of Robin Hood.

Warlord is set in 1194 and sees Richard the Lionheart in Normandy engaged in a bloody war to drive the French out of his continental territory. Using the brutal tactics of medieval warfare – siege, savagery and scorched earth – the king is gradually pushing back the forces of King Philip of France.

By his side are Robert, Earl of Locksley, better known as the erstwhile outlaw Robin Hood, and Sir Alan Dale, his loyal friend, and a musician and warrior of great skill. Donald’s Outlaw series has become a fixture in the best seller lists and gained great reviews.

His Robin is charismatic and a great leader, but a much more complex man than is usually portrayed with a far darker side – not really a “merry man” in any shape or form.

Click here to read this article from Kent News