The Palio banishes Siena’s woes – for a day 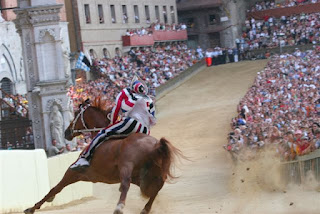 On high, in Siena town hall, the 14th-century fresco by Ambrogio Lorenzetti portrays the pestilent consequences of bad government – and the ordered society which good government produces. There is no doubt about which is ahead.

Down in the city, though, the bad presently wins. The council cannot pass a budget; a state-appointed commissioner has replaced the mayor, as prime minister Mario Monti has replaced Silvio Berlusconi at the head of the Italian government.

The university, among Italy’s best, is broke. The bank that claims to be the oldest in the world – Monte dei Paschi Di Siena, Italy’s third largest, founded as a pawnshop in 1472 – lost €4.7bn last year and had to get state aid.

But in the square outside the town hall, Siena’s resilience is on noisy display. The Palio has come – not to town, but welled up from its ancient guts, marching out of 17 contradas, the medieval divisions of the city, older than the Monte dei Paschi and more solvent. Their names are Duck, Wave, Panther, Tower, and they surround their citizens’ lives.

Click here to read this article from the Financial Times