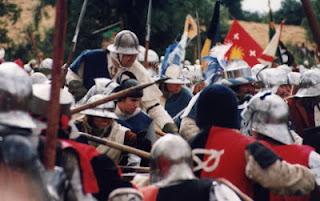 Organisers of Tewkesbury Medieval Festival had more than one battle on their hands at the weekend. Fields off Gloucester Road, where the annual re-enactment of the 1471 Battle of Tewkesbury takes place, were so damp due to the wet weather that it caused a host of problems.

But Saturday and Sunday's displays went ahead thanks to the determination of the festival organisers. Spokesman Steve Goodchild said: "It was very squelchy and on Saturday the traders had to be towed out on to the field."

Crowd numbers were down, with Mr Goodchild saying about 15,000 people attended the festival, less than on the normal turnout of 20,000.

Click here to read this article from This is Gloucestershire