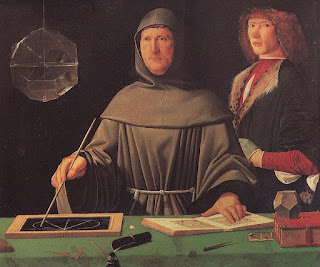 Consider some headlines from the past week. China announced its gross domestic product had slowed to a three-year low of 7.6 percent in the latest quarter. The International Monetary Fund cut its global growth forecasts to 3.9 percent for 2013. And Citigroup Inc. announced its net income was down 12 percent.

The system that generates these 21st-century accounting figures -- the numbers that run our nations and corporations -- was first codified by a Renaissance friar named Fra Luca Bartolomeo de Pacioli. He was at one time more famous, as a mathematician, than his collaborator Leonardo da Vinci.

Pacioli is remembered today, if he’s remembered at all, as the father of accounting. He wrote the first mathematical encyclopedia of Europe, which made two critical contributions to modern science and commerce: It was the first printed book to explain Hindu-Arabic arithmetic and its offshoot, algebra, and it contained the first printed treatise on Italian accounting.