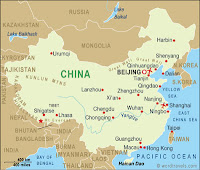 Liquid inside an ancient wine vessel unearthed in Shaanxi province is considered to be the earliest wine in China's history, archaeologists told Xinhua Thursday. The wine vessel made of bronze was unearthed in a noble's tomb of the West Zhou Dynasty (1046 BC - 771 BC) in Shigushan Mountain in Baoji city.

The liquid is likely the oldest wine discovered in China, said Liu Jun, director of Baoji Archaeology Institute, who is in charge of the project. The vessel, one of the six discovered in the tomb, could be heard to contain a liquid when it was shaken, Liu said.

Click here to read this article from the Xinhua News Agency