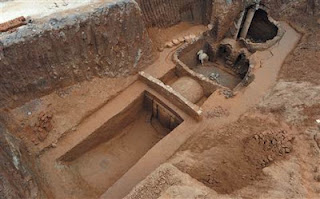 About 1,800 years ago, at a time when China was breaking apart into three warring kingdoms, a warrior was laid to rest.

Buried in a tomb with domed roofs, along with his wife, he was about 45 years old when he died. Their skeletal remains were found inside two wooden coffins that had rotted away. Archaeologists don't know their names but, based on the tomb design and grave goods, they believe he was a general who had served one or more of the country's warring lords, perhaps Cao Cao and his son Cao Pi.

His tomb was discovered in Xiangyang, a city that, in the time of the Three Kingdoms, was of great strategic importance. Rescue excavations started in October 2008 and now the discovery is detailed in the most recent edition of the journal Chinese Archaeology.