In Siena's Pinocateca Nazionale museum, four chairs have been placed in a row in front of Simone Martini's Altarpiece of Blessed Agostino Novello (c. 1328). Presumably, this is to give viewers in what is perhaps the best art-museum bargain in Europe—five euros ($6) for a gander in relative solitude at a trove of great Sienese art—a chance to relax and really ponder what is, in my opinion, the museum's masterpiece. 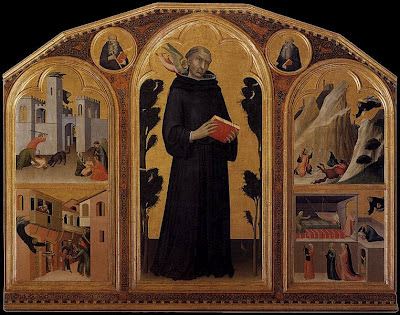 Martini (b. 1284) was one of the most prominent figures in the "Siena school" of painting which, according to conventional art history, was less connected to the beginning of the Italian Renaissance and more an early part of something called "International Gothic"—which began in the 14th century and ended early in the 15th century—and was inferior to the rational, perspectival realism (what we generally refer to as "naturalism") of the larger, neighboring city of Florence. Sienese painting waxed mystical, went in for out-of-proportion figures in physically jumbled (but narratively quite coherent) spaces, and specialized in crisp juxtapositions of colors often so subtle that it's hard to find names for them.

In 1315, Martini completed a huge fresco of the Maestà (the Virgin and Jesus being admired by all the saints) in the Palazzo Pubblico, the town hall of Siena's experiment in democratic government that lasted about 70 years before the Black Death killed more than half the city's population in 1348. After finishing his fresco, Martini went off to Naples and didn't return to Siena for a decade. When he did, the city had grown precipitously to a population of 50,000 (it's all of 54,000 today), and the Augustinian order of monks was ready to commission an altarpiece for its beloved future saint, Agostino Novello.

Click here to read this article from the Wall Street Journal