The Likeness of the King: A Prehistory of Portraiture in Late Medieval France wins award 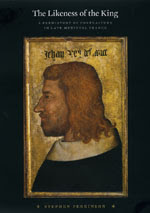 The Likeness of the King: A Prehistory of Portraiture in Late Medieval France, by Stephen Perkinson has been awarded the Morris D. Forkosch Prize, which goes to the best book by a first-time author in the field of intellectual history. The award is presented by the Journal of History of Ideas.

Perkinson, who is an Associate Professor of Art History at Bowdoin College, takes a fresh look at the development of portraiture, and takes readers through a fascinating tour of late Medieval history, literature, science, philosophy—ultimately using the face to enter the subtle, very human underpinnings of court life.

The book was recognized for offering "an interdisciplinary approach to visual and textual cultures [that] will prove deeply rewarding and inspiring to scholars across a wide range of customary academic boundaries."

"It's a real honor, it's very flattering," says Perkinson. "Especially since the book was so fun to write."

Whereas earlier studies tended to treat the invention of portraiture as a sign of artistic progress, The Likeness of the King examines it as part of an important shift in the history of ideas.

"For most of the Middle Ages, people made pictures of people, of rulers, that looked generic to our eyes, though they represented specific people," says Perkinson. "Their felt that facial features were an unreliable way of representing people, because your face is always in flux, you age, it's transitory. They used more stable signs of identity: names, coats of arms and heraldry."

Something changed in the late 14th century. Portraits began to include distinctly personal details. The standard account in art history is that artists developed better skills, that they became more knowledgeable about people as individuals.

Perkinson argues that this evolution came about as a result of social, political and scientific changes. "It's no coincidence that these changes we look at in portraiture occur at late medieval aristocratic courts, with their complex political and social structure," notes Perkinson. "If you're an artist and can, seemingly effortlessly, replicate the features of your lord, your ruler, that's a sign that you have a strong memory of that person. You're displaying your loyalty.

"That's critical at these courts, a way of currying the favor of the king. It works for artists, it also works for the person paying for the portrait as a gift. There is a connection between likeness and loyalty."

Although he traveled to France to study texts relating to the Valois court, one of the primary focuses of the work, Perkinson says many of the surprising directions of the research were uncovered at Bowdoin.

"This is very much a Bowdoin book as it required me to move among a range of fields, some I'm comfortable with, some farther afield: political theory, the history of science, theories of vision and memory, optics. I was able to discuss ideas with colleagues, and search through our Special Collections. I spent my junior sabbatical holed up in the Bowdoin library.

'Sometimes I'd spend weeks just reading old French romances to get an understanding of how people used concepts of likeness in literary sources, or how they talk about memory. Then I'd get to shift gears and spend time reading medieval theories of visions, or political treatises, or other sources. It was great fun, because the project got me connected with a really wide variety of ideas and topics."

The Journal of the History of Ideas awards the Morris D. Forkosch Prize each year, with $2000 going to the winner. To be eligible it must be the first book published by a single author, and must pertain to one or more of the disciplines associated with intellectual history and the history of ideas, including history, philosophy, political thought, the social sciences and literature.

Sources: Bowdoin College, Journal of the History of Ideas