Here are several reports of medieval archaeological finds this month:


Archaeologists from the University of Aarhus in Denmark have discovered a royal palace belonging to Harald Bluetooth, who ruled both Denmark and Norway during the later years of the tenth century. 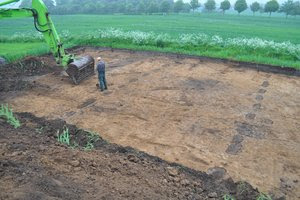 Mads Dengsø Jessen, the archaeologist from Århus University who led the dig said four buildings from Harald’s time had been discovered at the site, which is in southern Jutland. The buildings are characteristic of those built at round fortresses known as Trelleborg.

Jessen explained, "Here we have found four houses of Trelleborg type from Harald Bluetooth's time which lies within the palisade and are of the same type as the barracks houses that are known from the ring fortresses Aggersborg, Fyrkat and Trelleborg. This tells us that we have uncovered a large complex, and the strict geometrical construction is a typical example of Harald’s work. The finds show that there was a royal construction of dimensions that could compare with similar building complexes on the continent, such as those by the Holy Roman Emperor in Germany."

The archaeologists also believe that Harald's royal hall is probably underneath a church on the site. The site is located in the village of Jelling, which is famous as the place where two great Tumulus mounds were erected in the late 900s. They seem to have been the burial mounds for Harald's parents. Also, Harald erected two large stones with runic inscriptions in this area, known as the Jelling Stones.

The research being done on this site is likely to change medieval historians perceptions about these Scandinavian fortresses. Jessen noted that, "The traditional interpretation is that they served only as military installations, but the identification of a large royal courtyard in Jelling with the same type of architecture that suggests ring fortresses also served as a hangout for the king when he traveled around the kingdom."

Archaeologists working in the English county of Norfolk uncovered two oyster shells in the churchyard of St. Nicholas' Church in Dereham. One of the shells contained remains of several paints, including yellow, a reddish, earthy brown colour and a small spot of black. The archaeologists believe that this shell was used as a palette for an artist working in the medieval period, perhaps the 12th or 13th centuries.

The discovery was part of a dig on the boundary wall of St. Nicholas' Church - last year a 20th century wall was removed from this spot, allowing archaeologists to dig a trench which discovered the shells, along with an ivory handle and a knife with antler handle. It is believed that these artifacts were rubbish from the church of a wealthy household living nearby. Click here to see some images from this dig on Flikr.

Workman digging in the English city of York have come across the remains of two human bodies in Lansdowne Terrance. Police determined that the remains were historical and have turned the investigation over to the York Archaeological Trust.

Martin Stockwell, field manager at the trust, told the York Press that “The builders have been doing some work there to build a new extension and located some human remains. We think this may have been part of St Edward’s Church which was located on the site. It was a medieval parish church taken down in the early 1500s.

“When they constructed Lansdowne Terrace, there is a story of the contractor who was carrying out the work finding a tonne of human remains so it looks like there was an extensive burial ground there.”

Archaeologists were surprised to discover a medieval burial ground just outside St John’s Church in Peterborough, Cambridgeshire. The bodies of four people, which are at least 500 years old, were uncovered during preparations for a redevelopment in Peterborough's city centre.

Adam Yates, project manager for Northamptonshire Archaeologists, told the Peterborough Today, “Records make no reference to a grave yard next to the church, so it was a surprise all round to find burials had taken place there. The burial ground itself probably dates back to the early days of the church, in or around the 15th century. They are consistent with churchyard burials as they are all lined up.”

An archaeological dig in East Lothian, Scotland has uncovered a medieval pit with a number of pottery shards dating back to the late-12th and 13th centuries. Tom Addyman, director of Addyman Archaeology, told the annual conference of the Medieval Pottery Research Group that "this is an extremely important find. The pit itself is a very odd feature. It appears to be some sort of rubbish pit or latrine but we don't know exactly what it was used for so that is being investigated at the moment."

He added, "I was very hopeful that we might find something, though I felt it might be a long shot to find anything of great significance, so I was absolutely delighted when this was uncovered. In spite of their date the pieces were most beautifully made by a potter of great competence working at a fast wheel to produce straight sided vessels whose ribbed sides are only millimetres thick."

The Ministry of Tourism and Archaeology in the Palestinian territory of Gaza has announced the discovery of a house believed to be about 800 years old. Workers digging in a street in the old center of the city of Gaza came across the remains of the building, which may have been a house or a tomb. Further digging has revealed several arches inscribed with multiple bright motifs.