God’s Philosophers: How the medieval world laid the foundations of modern science 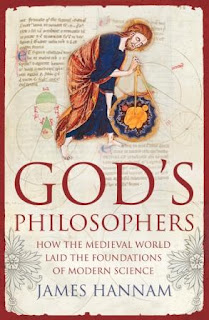 The Royal Society has unveiled its longlist for Prize for Science Books, the world’s most prestigious award for science writing, which includes a book about science in the Middle Ages. God’s Philosophers: How the medieval world laid the foundations of modern science

, by James Hannam, debunks many of the myths and stereotypes about science and technological advancement during the Middle Ages, and profiles some of the important thinkers of period, such as Thomas Aquinas, Nicole Oresme and William of Ockham.

The five-member committee who made the choice said that Hannam's book "is a revelation, contradicting the popular idea of the Middle Ages as the “dark” ages, mapping key progressions during an era none of us associate with scientific advances and celebrating the lesser known mathematicians, 'philosophers' and anatomists on whose shoulders modern science stands."

Eleven other books also made the longlist, including Darwin’s Island: The Galapagos in the Garden of England

by Steve Jones. This year’s longlist includes eight authors who are new to the prize, three who have been previously shortlisted and one previous winner (Jones, who won in 1994).

Maggie Philbin, Chair of the judges, said: “There were some fascinating books in this year’s entries, all of which explore science in very different ways. Narrowing it down to just twelve was very challenging and left us with a wonderful, diverse longlist that we’re all looking forward to really getting our teeth into. "

God’s Philosophers has received very positive reviews since being released last year. James Hannan has also set up a website Medieval Science and Philosophy and a Facebook page to promote his book.

See also the Medievalists.net page for Aladdin’s Lamp: How Greek Science Came to Europe Through the Islamic World