Westgate Tower Museum in Canterbury is saved from closure 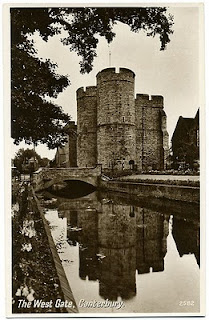 A medieval landmark in Canterbury, England, which was facing closure because of lack of revenues, will now be kept open and leased to a local businessman. The Westgate Tower Museum, the largest medieval gateway in Great Britain, will now be operated by Charles Lambie, who owns an old jail next door to the museum. Mr. Lambie has already donated £250,000 to the Canterbury City Council to keep the museum open.

Mr. Lambie plans to combine the museum and old jail into one attraction that will include a cafe. In an interview with the BBC, he described the Westgate Tower as "Canterbury's second most iconic building after the cathedral. If ever I have visitors coming to Canterbury I always start by taking them to the Westgate Towers, go up those wonderful staircases, and you can look over the whole city. You can see Canterbury in minutes."

The Westgate Tower was built around 1380. Its museum houses artefacts related to the city's military history. In February the city council decided to close the museum, along with Roman Museum and the Herne's Bay Museum, because of a lack of funds. The decision was met with protests from the local community, and efforts have been made to seek another solution to the situation.