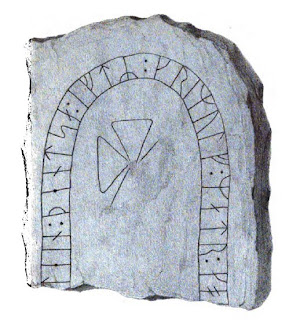 It was not necessary to be literate to be able to access rune carvings in the 11th century. At the same time those who could read were able to glean much more information from a rune stone than merely what was written in runes. This is shown in new research from Uppsala University in Sweden.

Rune stones are an important part of the Swedish cultural environment. Many of them are still standing in their original places and still bear witness about the inhabitants of the area from a thousand years ago. They thereby represent a unique source of knowledge about the Viking Age, providing us with glimpses of a period we otherwise would have known very little about. Among other themes, they tell us about family relations, travels, or matters of faith, and all of it in a language that scholars can understand fairly readily.

“The language and factual information of runic inscriptions are fairly well researched, but we know little about how Viking Age people read a rune stone,” says Marco Bianchi at the Department of Scandinavian Languages, whose dissertation investigates Viking Age written culture in the provinces of Uppland and Södermanland.

There are a number of inscriptions with runes that do not convey any linguistic meaning. In Uppland they are found both in areas that are rich in rune stones and in those that have very few.

“But the fewer rune stones there were in the vicinity, the poorer writers the carvers of these non-verbal inscriptions were. What was important was thus not to convey a linguistic message, but to create a rune carving that was perceived by the local people as credible,” claims Marco Bianchi.

However, rune stones entirely lacking in linguistic content are rather rare. On most rune stones you can read a little narrative in the form of a memorial inscription that often winds back and forth across a large stone surface. At first glance these runic inscriptions seem chaotic, but they are in fact very well structured. Usually they are meant to be read starting in the lower left-hand corner. Another observation Marco Bianchi makes is that many rune stones do not have any given reading order. Different parts of the inscription are in such cases visually separated from each other and can be read in any order the reader wishes.

“You can compare a rune stone text with a newspaper spread or a Web page, where the reader is attracted by headings and pictures,” says Marco Bianchi.

The visual design not only structures the linguistic message but complements and nuances it as well.

“On many rune stones the interplay between ornamentation and the runes is striking. To people of the Viking Age, the actual runes were only part of the message of the rune stone,” he says.

Marco Bianchi's dissertation, Runor som resurs: Vikingatida skriftkultur i Uppland och Södermanland (Runes as a resource: Viking Age written culture in Uppland and Södermanland) is available in Swedish and can be downloaded here.