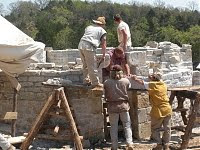 With the official launch last month, a team of French and American architectural experts, historians and entrepreneurs have embarked on a 20 year project to build a medieval castle in the American state of Arkansas. The Ozark Medieval Fortress was officially opened to the public on May 1 as an educational project and tourist attraction.

The creation is the brainchild of Michel Guyot - after restoring four castles decided that he wanted to recreate his own 13th century style fortress. He started building Guédelon Castle in Burgundy, France in 1997 - it is due to be completed sometime in the 2020s.

Another opportunity presented itself in 2008 when a retired French couple, Solange and Jean-Marc Mirat, decided to offer Guyot some of their land in northern Arkansas town of Lead Hill. After raising $1.5 million in investments, Guyot bought the 50-acre property and started construction. 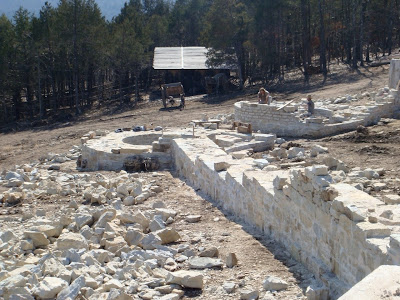 The Ozark Medieval Fortress aims to be a full-sized, fortified castle, with 45 foot high towers, a drawbridge, and 6 foot wide stone walls surrounding an expansive inner courtyard, using the materials, techniques, and rules of the 13th century. Thirty masons, carpenters and stone carvers authentically dressed, plan to work year-round for twenty years before the project is complete. 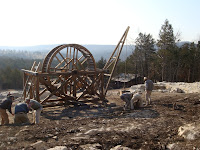 One of the goals of the building project is to reproduce with utmost authenticity the technology used in the 13th century, with the exception of adhering to modern safety standards. Historians, such as Professor Andrew Tallon of Vassar University, are monitoring the construction.

Like the Guédelon Castle project, the organizers believe that the castle will be a fascinating educational opportunity for students, offering what they call an "open air classroom focused on the Middle Ages."

Organizers are hoping to draw 150,000 visitors a year to the castle - in the first month they welcomed about a thousand people, but hard work at public relations is getting them extensive media attention. Noémi Brunet, Marketing and Public Relations manager for the Ozark Medieval Fortress, tells Medievalists.net "We are socializing like mad on Twitter and Facebook. In 6 months we had 70 000 visitors on our website."

It is still too early to tell if this medieval castle will be a financial success, but for everyone involved, it should be a memorable experience. 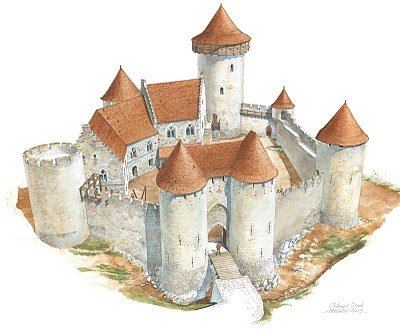 If everything goes to plan, this is how the castle will look like in 2030

Breaking Old Ground - from Walrus Magazine, about the French castle