Did the Crusaders have a Muslim ally in the First Crusade? 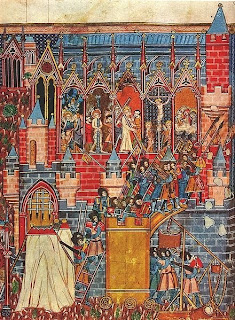 A new article is examining the relationship between Islamic states and the Crusader army during the First Crusade (1096-99) and suggests that the Fatimid kingdom of Egypt did attempt to ally with the Crusaders. The article, "Fatimids, Crusaders and the Fall of Islamic Jerusalem: Foes or Allies?" was written by Maher Y. Abu-Munshar in the latest issue of Al-Masaq: Islam and the Medieval Mediterranean.

Abu-Munshar explains that both the Fatimids and the Crusaders wanted to "foster collaboration and form an alliance" with each other for their own reasons: the Fatimids believed that the main threat to their country was the Seljuk Turks, while the Crusaders wished to avoid a united Muslim front against them as they marched through the Middle East. The main evidence for this alliance lies in a delegation the Fatimids sent to the Crusaders while they were camped outside Antioch. Albert of Aachen, for example, describes how the Fatimid ruler, "sent fifteen envoys who were skilled in different languages to the army of the living God, about a mutual alliance for peace and his kingdom."

These envoys stayed in the Crusader camp for several weeks, and made a proposal to fight against the Seljuks. The Crusaders would be rewarded with northern Syria, while the Fatimids would regain Palestine including Jerusalem. The Crusaders did not seem to respond directly to this proposal, but instead sent their own envoys to Egypt to continue the discussions.

The situation then changed after the Fatimids took advantage of the Seljuks' problems to attack and regain Jerusalem. According to the 12th century writer William of Tyre, the Fatimids, "seemed to imply that they were conferring a great favour on the Christians by allowing unarmed pilgrims to go to Jerusalem in groups of two or three hundred and returned safely after completing their prayers. The leaders of the Christian forces regarded this message as an insult. They forced the envoy to return with the answer that the army would not consent to go thither in small detachments, according to the condition proposed. On the contrary, it would march on Jerusalem as one united host and threaten the Kingdom of their master."

The Crusaders did carry out their threat by laying siege to Jerusalem, and on capturing it killed thousands of it inhabitants.

Abu-Munshar also questions the assumption that the Fatimids were ignorant of the Crusader's ultimate goals. He writes, "How could the Fatimids misunderstand the crusaders’ aim when we know that the latter started their journey from Europe and took months, even years, to arrive in the east, with the clear aim of regaining Islamic Jerusalem from the Muslims? It is possible that most Muslims, Saljuqs and Fatimids alike, were at least partially aware of the crusaders’ intentions."

The article, "Fatimids, Crusaders and the Fall of Islamic Jerusalem: Foes or Allies?" appears in Volume 22, Issue 1 of Al-Masaq. Click here to access an online version.