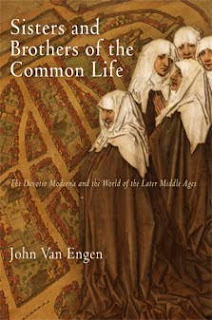 Western Michigan University has awarded the prestigious Grundler Prize to a University of Notre Dame scholar for his book, Sisters and Brothers of the Common Life: The Devotio Moderna and the World of the Later Middle Ages.

The prize was awarded at the 45th International Congress on Medieval Studies May 15 to John van Engen, professor of history at Notre Dame. The Grundler Prize was established to honor the late Dr. Otto Grundler, former director of the WMU Medieval Institute, which sponsors the annual congress.

Published in 2008 by the University of Pennsylvania Press, van Engen's book is based on research about a noteworthy religious movement in the later Middle Ages--the Devotio Moderna, or Modern Devout. Beginning in the 1380s in market towns along the Ijssel River of the east-central Netherlands and in the county of Holland, they formed households organized as communes and forged lives centered on private devotion. They lived on city streets alongside their neighbors, managed properties and rents in common, and worked in the textile and book trades, all the while refusing to profess vows as members of any religious order or to acquire spouses and personal property as lay citizens.

"Drawing upon an unrivalled knowledge of writings by and about the Modern Devout, van Engen succeeds in giving context to the humanity, the urban and religious community, even the spiritual longings of this vanished experiment in communal living, set amid the rich complexity of Dutch urban life," stated the citation for van Engen's prize. "…the Devout were committed to the 'simplicities' of Christian conversion, communal living, education of the young, and propagation of holy texts. And it was in these things that the influence of the Brothers and Sisters of the Common Life would extend to the lives of such disparate figures as Erasmus of Rotterdam, Ignatius Loyola, and John Calvin."