Archaeologists working at Rochester Cathedral in Kent, England, have discovered a late-medieval building which used part of an ancient Roman wall. They have uncovered a door or window that looks onto the Priory’s infirmary garden.

Graham Keevil, who is leading the archaeological investigation, believes that the building would have been the home for the warden of the infirmary. The window or door was located after digging about six feet below ground. 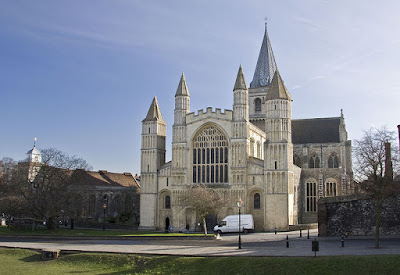 "But everything else that goes on in the precinct we really do not know very much about. So to get a major building like this, even from such a relatively small pit, the implications of that window or door are massive in terms of then our understanding of the entire precinct."

In May the archaeologists began working on the grounds of the Cathedral to preserve sectiosn of the wall that once surrounded and protected the Roman town of Durobrivae. They plan to do more trial archaeological pits, survey the wall and carry out emergency repairs.

The wall was probably built in the first half of the third century AD, and was used until the 13th century, when new walls extended the city limits southwards.

Click here to see a video report from Kent Online