Archaeological excavations on the site of Nevern Castle in Wales has revealed a large group of buildings thought to date from the 12th century. It is hoped that the discovery will provide new details on the history of the Norman fortress that was built in 1108.

The excavations were directed by Dr Chris Caple from Durham University and supported by Peter Crane, Pembrokeshire Coast National Park Archaeologist. The team also included students from Durham and Lampeter University and local volunteers from Cardigan, Newport and the Nevern area.

Speaking of the finds, Dr Chris Caple said: “This season’s excavations enabled us to make good progress in revealing and understanding the structures of the 12th century occupation (two towers and three hall-like buildings) of Nevern Castle. These constructions now appear to have been a highly desirable stone residence, a visible display of wealth and significant technical achievement.

“The recent excavation has revealed substantial evidence for buildings. On the inner castle the remains of a square stone tower have started to appear – the top of the remaining walls must be over two metres higher than ground on which it was built. Beside this tower was evidence of a lean-to structure against the castle’s perimeter wall.

“Elsewhere in the castle, and probably of similar date, the extent of what was probably the Great Hall was uncovered. It was built of stone and some twenty- two metres long by eight metres wide and, given the width of the walls, was probably a two storey building. This hall was constructed against another building, possibly a chapel or high class accommodation, to be investigated in the next phase of excavation.” 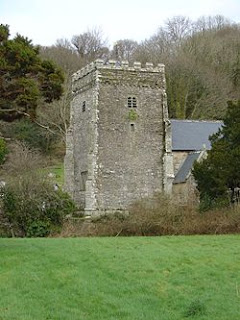 Until this discover, little of Nevern Castle could be seen. Located in Pembrokeshire, the castle was built by the Norman marcher lord Robert fitz Martin around 1108. The castle was destroyed and rebuilt during the 12th century but after 1197 was abandoned. A Norman church remains near the site of the castle. The site also has a Celtic cross, which dates from the 9th or 10th century (see the video below).

This third season of the Nevern Castle excavation took place over four weeks. The project is run by a partnership of Nevern Community Council, Pembrokeshire Coast National Park Authority and Durham University and is funded through Cadw, the Welsh Assembly Government and the Park Authority, who manage the project. Also working on the project are Dyfed Archaeological Trust, with additional funding from PLANED.

The next phase of the excavation is now taking place and will continue until July 16th. There will be guided tours at 2.45pm for approximately half an hour each day except Thursdays or in very poor weather.

For details of the excavation, Duncan Schlee from the Dyfed Archaeology Trust has created a ‘dig diary’ at www.cambria.org.uk/nevern/neverndigdiary.html.