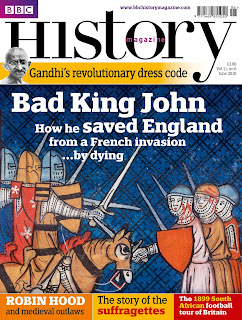 The June issue of BBC History Magazine contains three features which have a Medieval focus. It begins with the article ‘King John and the French invasion of England’, written by Sean McGlynn, author of Blood Cries Afar: The Forgotten Invasion of England 1216

. McGlynn tells the story of how King John fared in the Baron’s Revolt at the end of his reign, and asks whether he did his subjects a favour by taking his bow at an opportune time.

Next, with Ridley Scott’s Robin Hood now on the big screen with Russell Crowe as the legendary hero, Hugh Doherty's article ‘The Real Robin Hoods’ looks at the judicial process of outlawry in medieval England and examines what it really meant to be declared an outlaw.

Finally, Mark Glancy reviews three previous Robin Hood films, including Kevin Costner's version in Prince of Thieves, and offers his own views on their performance and historical accuracy. This article, Robin Hood: Three Films, is available online at the BBC History Magazine website.

Robert Attar, Features Editor of BBC History Magazine, commented “Medieval history is very popular among our readers, judging by our postbag and the success of issues with Medieval themed covers. We’ve been fortunate to have some of the leading Medievalists write for us in recent months on subjects as diverse as Robin Hood, Richard III, Agincourt and the Norman Conquest.”