Were the Ancient Greek Athletes Tougher Than Today's Olympians? 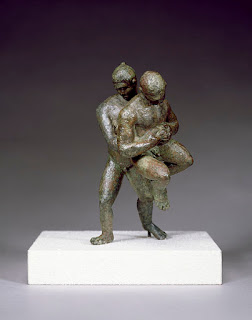 Probably not well. Ancient athletes could have held their own in the first modern Olympic Games of 1896. Phayllos of Croton, for example, hurled the discus 95 feet in the Pythian games around 500 B.C. Although that distance is approximate—Greeks measured distance in actual human feet—it would have put him in the running for a medal at the 1896 Olympic competition. Phayllos probably would have bested American Robert Garrett’s 95.6-foot throw if he had used modern tools and techniques. Ancient hurlers likely used a heavier discus and took only a three-quarter turn before releasing it, rather than the two-and-a-quarter turns that modern athletes use. Variations aside, Phayllos wouldn’t have stood a chance against 21st-century athletes: The current world record is more than 243 feet.

Historians have puzzled over records from ancient long-jump competitions. Athletes posted distances of well over 50 feet—nearly double the current world long-jump record. Many classicists assume that the event was actually a triple jump, although that still puts the ancients surprisingly close to the modern record. The ancient competition was quite different from the modern version, however. The Greeks probably started from a standstill and swung handheld weights, known as halteres, to provide momentum on takeoff and allow them to extend their feet farther forward on landing.