The conflict in Syria is the product of very modern forces — a legacy of dictatorship and regional geo-politicking — but it’s taking place over a terrain with a rich and deep history. Syria’s deserts, river valleys and mountain passes bear the traces of some of the world’s oldest civilizations; its major cities, especially Damascus and Aleppo, are among the longest continually inhabited on the planet and have endured both the scourges of man (invasions, massacres) and the ravages of nature (earthquakes, plagues). As the rebellion against President Bashar Assad’s rule rages on, concern mounts over the state of the country’s antiquities. Veteran British correspondent Robert Fisk warned of “Syria’s pulverized past,” with precious artifacts disappearing from unattended museums and storehouses, all the while as the daily toll of war imperils some of Syria’s venerable monuments themselves. 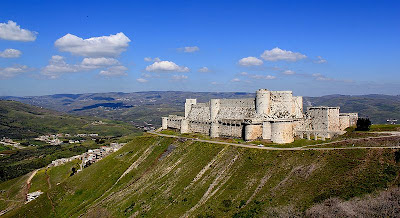 Syria has been the site of bitter conflict before. Some nine hundred years ago, a motley band of Frankish, German and Italian soldiers and mercenaries turned up on Levantine soil under the Papal banner of the First Crusade. Seizing a number of important cities — Jerusalem, Tripoli (in today’s Lebanon), Antioch (modern day Antakya, Turkey) — they attempted to entrench themselves in the Holy Land permanently. This international coalition of the willing would ultimately be driven out, but not before leaving behind a host of beautiful fortresses, many of which, while astonishing testaments to medieval engineering and construction, bear the intractable scars of newer conflicts.

Click here to read this article from Time magazine