“Princess Ukok,” who was discovered high in Siberia’s Altai mountains, is about 2,500 years old. She was buried in the permafrost, which kept her body remarkably well preserved, including tattoos that are among “the most complicated and the most beautiful” archeologists have found. 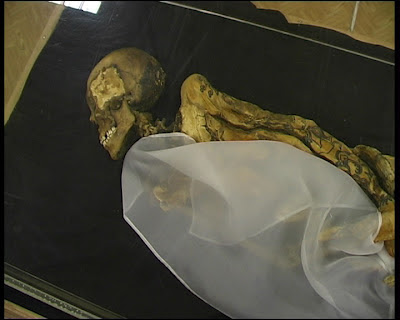 “More ancient tattoos have been found, like the Ice Man found in the Alps,” lead researcher Natalia Polosmak told the Siberian Times, “but he only had lines, not the perfect and highly artistic images one can see on the bodies of the Pazyryks” — the nomadic tribe to which the princess likely belonged.

“It is a phenomenal level of tattoo art. Incredible.”

Part of what’s striking about the body art is how modern-looking it is, which is no coincidence, Polosmak says. All the mummies they’ve found that only had one tattoo had them placed on their left shoulders, which Polosmak believes is likely linked to basic body composition — it’s a noticeable place to show off the art.