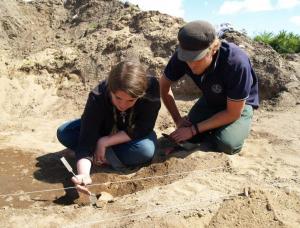 A battle-scarred, eighth-century town unearthed in northern Germany may be the earliest Viking settlement in the historical record, archaeologists announced recently.

Ongoing excavations at Füsing (map), near the Danish border, link the site to the "lost" Viking town of Sliasthorp—first recorded in A.D. 804 by royal scribes of the powerful Frankish ruler Charlemagne. Used as a military base by the earliest Scandinavian kings, Sliasthorp's location was unknown until now, said dig leader Andres Dobat, of Aarhus University in Denmark.

Whether it proves to be the historic town or not, the site offers valuable insights into military organization and town planning in the early Viking era, according to the study team. Some 30 buildings have been uncovered since excavations began in 2010.

Aerial photographs and geomagnetic surveys indicate about 200 buildings in total. Chief among them is a Viking longhouse measuring more than a hundred feet (30 meters) long and 30 feet (9 meters) wide.

The longhouse's burnt-out remains seemingly bear witness to a violent attack: Arrowheads found embedded in its charred wall posts suggest the communal building was at some point set on fire and shot at, Dobat said.


A Viking Saga from Aarhus Universitet on Vimeo.