‘Vicious’ Vikings were not as horrible as history suggests 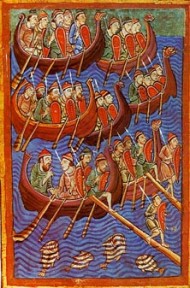 The Viking “invasion” of the Northern Isles of Scotland may not have been the sudden violent takeover of the lands as previously believed.

The perception of Scandinavian warriors suddenly arriving in their longships – raping and pillaging their way through remote  villages – is now being questioned. Recent discoveries made at an archaeological dig on Orkney have opened the debate of when exactly the first Vikings settled on the islands.

Martin Carruthers, lecturer in archaeology at Orkney College, who is leading the excavations at The Cairns in South Ronaldsay, claims the findings could suggest a “more prolonged” and “peaceful” period of settlement than previously thought.

What has added to the debate is the discovery of soapstone crafting materials which are dated to before AD600, long before the chronicled Viking colonisation of the 9th century.

Click here to read this article from The Scotsman

See also The Good, the Bad and the Ugly: Portrayals of Vikings in “The Fragmentary Annals of Ireland”