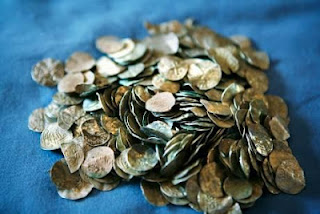 A silver treasure from the 12th century has been found on the Baltic island Gotland, where over 600 pieces of silver coins have been unearthed, according to reports in local media.

“This is an amazing find. It’s unbelievable that treasures of this scale exist here on Gotland,” Marie Louise Hellquist of Gotland’s County Administrative Board (Länsstyrelsen) told local newspaper Hela Gotland.

The medieval treasure was uncovered last Monday, as the landowner was moving soil. Some 500 pieces of coin were discovered in the field, and following further searches conducted once archaeologists arrived on Wednesday, that figure has swollen considerably.

Click here to read the full article from The Local