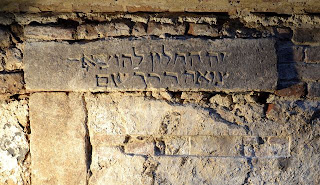 Archaeologists in Cologne, Germany have uncovered a fascinating 13th-century Hebrew inscription on a lintel stone in the basement of a home near the city’s ancient synagogue. The Hebrew inscription reads “This is the window through which the feces are to be taken out.”

The inscription was discovered in December 2011 on the lintel above a walled-up window in the cellar of Lyvermann House, which was built in about 1266 and belonged to a wealthy Jewish family that lived right near the synagogue. Behind the wall was a cesspool, six meters deep.

According to Prof. David Assaf of Tel Aviv University’s Jewish History Department, “Such a serious-amusing inscription has never been found anywhere, not before and not since.”