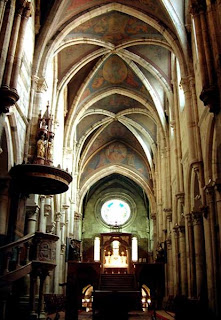 The medieval church of the Archabbey of Pannonhalma was restored over the last few months, and was solemnly reconsecrated today. The interior reconstruction of the 13th-century abbey church was carried out according to the plans of British architect, John Pawson. The reconstruction mainly focused on the main liturgical area of the church, the chancel and the monastic choir. The main goal of the alterations was to restore the simplicity of this space, and this meant the removal of the 19th century historicising decoration designed by Ferenc Storno (Storno similarly removed the earlier Baroque furnishing of the basilica, to make way for his own, 'historically correct' decorations - now his work suffered a similar fate). The Storno-reconstruction, which was completed in 1876, was the last major intervention inside the church. Storno's pulpit was moved to a chapel at Pannonhalma, while the 19th century stained glass windows - including the large rose window depicting the patron of the church, St. Martin - have been deposited at the Museum of Applied Arts in Budapest. On the other hand, the painted glass panes of the side aisle remained there, and the vault frescoes of Storno were cleaned.

Click here to read this article from Medieval Hungary Blog