The results of the largest archaeological investigation ever to have taken place in London are to be published by the Museum of London Archaeology. Some 10,500 human skeletons dating from the 12th century to the 1500s were discovered by archaeologists a decade ago. It has taken ten years to analyse the results of this colossal discovery. Amongst the orderly burials were a number of mass burial pits that had scientists baffled. 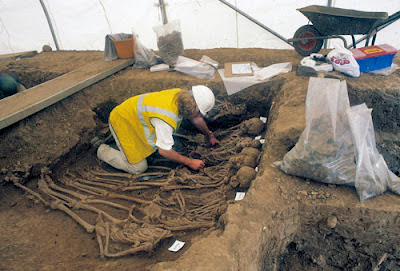 Through radiocarbon dating, the mass burials were accurately dated but the timings didn’t marry with devastating events know to have taken place in the medieval period, like the Black Death or the Great Famine. Osteologist Don Walker set about solving the mystery. He turned to contemporary documentary sources, in which he found mention of ‘heavy rains’, ‘there was a failure of the crops; upon which failure, a famine ensued... many thousand persons perished’.

Whilst examining a possible cause for these climatic changes, Don uncovered references to a cataclysmic volcano that erupted at this time. It is believed to have erupted somewhere in the tropics, perhaps El Chichón in Mexico or Quilotoa in Ecuador. Its force was such that ice-core data is evident in both hemispheres. The effects of this massive eruption were felt across the globe, as a ‘dry fog’ descended across the world, cooling the Earth’s surface.

Don Walker, MOLA Osteologist, said: “This is the first archaeological evidence for the 1258 volcano and is an excellent example of the complexity of knowledge that can be gained from archaeological evidence. It is amazing to think that such a massive global natural disaster has been identified in a small area of East London. MOLA work on such a wide range of projects but I am always surprised when incredible discoveries like this one come to light.” 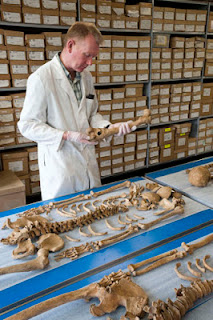 Bill McGuire, Professor of Geophysical and Climate Hazards at University College London, added, “This was certainly a prodigious volcanic event; one of the largest in the last few thousand years. Consequently, it is not really a surprise that one legacy should be a serious increase in mortality in London. Through their influence on climate, major volcanic blasts can affect any locality on the planet, and an eruption in distant Indonesia - which is one of a number of host candidates for the 1257/8 eruption - could without doubt reach out to take lives in the UK's capital.”

The osteological findings are revealed in the MOLA monograph A bioarchaeological study of medieval burials on the site of St Mary Spital: excavations at Spitalfields Market, London E1, 1991–2007.

See also our article: Volcano Blast led to thousands of deaths in London in1258