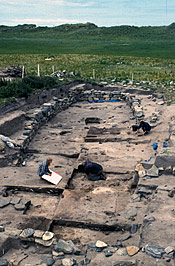 Powerful figures from the late Iron Age through to the end of the Vikings were drawn to a sandy plain on South Uist, according to archaeologists.

Bornais, on the west side of the island, has the remains of a large farmstead and a major Norse settlement.

The area has produced large numbers of finds, including what have been described as exotic items from abroad.

Green marble from Greece, ivory from Greenland and bronze pins from Ireland have been among the finds.

A piece of bone marked with an ogham inscription, an ancient text that arrived in Scotland from Ireland, was also found.

Archaeologists said the items provided a detailed picture of life in the first millennium AD.