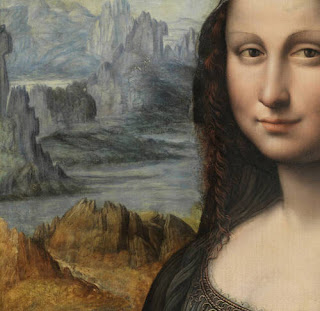 The most mysterious painting in the history of European art just got a little more mysterious. For centuries, Madrid's Prado Museum has held what was believed to be a mere replica of Leonardo da Vinci's masterpiece, the Mona Lisa. But researchers at the museum recently discovered that their copy wasn't just any copy. Thanks to the use of infrared technology, they deduced that the work was not only painted in Leonardo's workshop, by one of his students, but that it was done at the same time as the master was completing the original.

Although the copy, which depicts La Gioconda with a narrower face, redder dress and significantly more pronounced eyebrows than the original, has been in the Prado's collection for centuries, no one thought much of it, and it was generally attributed to an unknown Flemish artist. But when the Prado's conservators began to study it in preparation for an upcoming show in Paris, they realized there might be more to the work than previously recognized. Using infrared technology, they detected a lush Tuscan landscape — the same as in Leonardo's original — hiding beneath the coat of black varnish that had been added probably in the 18th century and obscured the original background.

Click here to read this article from Time Magazine