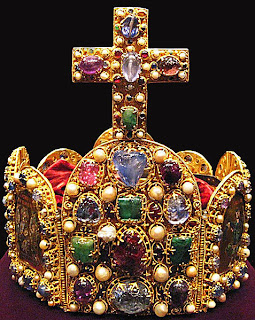 The octagonal crown fashioned from pure gold is studded with 144 precious stones and just as many pearls yet it is a priceless artifact for other reasons
.
The crown almost certainly once graced the head of the first German emperor Otto I more than 1,000 years ago. For hundreds of years it has been one of the most potent symbols of the Holy Roman Empire, the German kingdom which stretched across most of Central Europe.

Today it rests together with the other Austrian crown jewels behind reinforced glass in the Imperial Treasury or 'Schatzkammer' at the Hofburg palace in the Austrian capital Vienna.

'Around 280,000 visitors come here every year,' said Anja Priewe who works for the marketing department of the city's tourist authority. Tourists flock to see the imperial regalia but few of them take the time to look closely at particular objects.