Armed robbers have stolen dozens of artefacts from a museum in Olympia dedicated to the history Olympics. Officials say two masked men smashed glass display cabinets after overpowering a guard.

Local mayor Thymios Kotzias said items of "incalculable" value had been stolen, but gave no details. 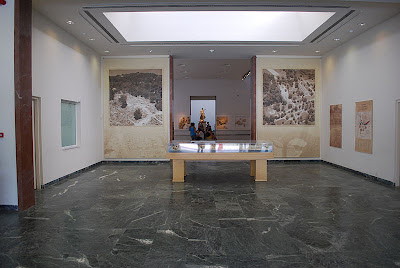 Culture Minister Pavlos Geroulanos has tendered his resignation, but it has so far not been accepted. He is on his way to the site in western Greece.

The armed thieves are reported to have entered the Museum of the History of the Olympic Games in Antiquity at 07:30 on Friday (05:30 GMT) and demanded that a female employee hand over various objects. When the employee refused she was tied up and gagged. The two men then smashed cabinets, stealing more than about 60 items, mostly bronze and clay statuettes, officials say.

Armed robbers on Friday seized dozens of items on display at the antiquities museum in Ancient Olympia, the birthplace of the ancient Olympics in southern Greece, after tying up an employee. Greece's Culture Minister Pavlos Geroulanos submitted his resignation after the robbery, state television reported.

Police and museum authorities did not have an immediate account of the items taken from smashed display cases, but local authorities and police said about 60 artifacts are estimated to have snatched.