Over the next few weeks, people walking across the Romerberg on their way to the Emperor's Cathedral will automatically find themselves facing a gigantic construction site. What's happening here in the heart of Frankfurt's old town, passers-by may ask. It is, simply put, one of the most controversial and, at the same time, one of the most spectacular reconstruction projects currently going on in Germany. While other cities squabble over the reconstruction of individual buildings, Frankfurt am Main has been discussing the reconstruction of an entire quarter. 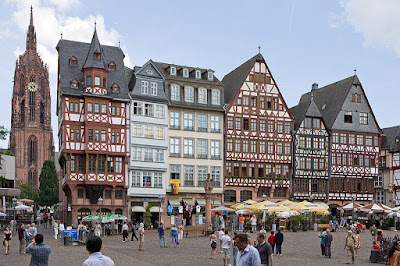 The chronology of the steps it took to bring the project to fruition says much about the general state of mind of Frankfurt's citizenry, for it was they that helped to bring about what the casual observer might call the obvious solution. But the influence exerted by Frankfurt's inhabitants is not surprising, really. After all, the city has been referred to as the "cradle of German democracy" since the landmark events of 1848.

The approximately 7,000-square-metre area in the heart of Frankfurt's old town will now be reconstructed on the basis of the original blueprints of the quarter. Once completed, it will comprise nearly 30 townhouses, eight of which being exact replicas of their historical predecessors. An entire housing row will be rebuilt along the path of the former alley "Hinter dem Lammchen", these houses being formerly known as "Junger Esslinger", "Alter Esslinger", "Goldenes Lammchen" and "Klein Nurnberg". Two further townhouses, named "Goldene Waage" and "Rotes Haus", will be reconstructed just north of the archaeological gardens. These gardens were set up right alongside Frankfurt's famous cathedral in 1972/73, a more or less unintentional by-product of the subway line construction that took place then. Various historical eras and styles are on display here, the reconstructed walls and bronze sculptures representing Roman times, the High Middle Ages and the typical design of the imperial palaces of the time.

Click here to read this article from Travel Daily News