Judgement Day is on the way: Leicester historian on Medieval ‘end of days’ research 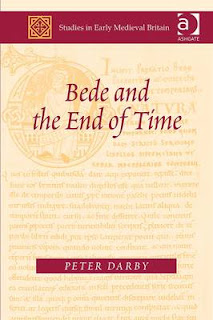 The English scholar Bede (c.673-735) is often regarded as the father of English history, principally because of his five-volume epic Historia ecclesiastica gentis Anglorum. But a new volume by Dr Peter Darby from our School of Historical Studies concentrates on a less well known aspect of Bede’s multi-faceted career.

Using his extensive Biblical knowledge and the impressive library of the monastery at Wearmouth-Jarrow where he spent his life, Bede wrote many works of theology and exegesis (the interpretation of biblical texts). Within these volumes Bede dealt at length with eschatology, the study of the end of days, and this is the subject of Dr Darby’s new book, Bede and the End of Time.

At this point, the Bible (still in Latin and copied by hand of course) was regarded as the definitive, literal work of God which, as well as describing history – the Old Testament period (from the Garden of Eden onwards) and the New Testament accounts of Christ’s life and times – also provided a framework for what was going to happen before, during and after Judgement Day. Bede was able to use his detailed memory of scripture to pick references to future events from throughout the Old and New Testaments and then sought to correlate them into a workable whole, including resolutions of the contradictions and paradoxes which he encountered.

Click here to read this article from the University of Leicester