Book Review: The Friar of Carcassonne 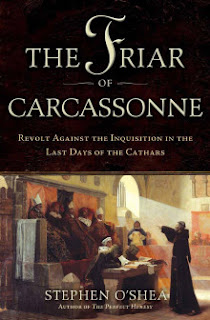 For a medieval saga of heresy, witchcraft or sedition to work really well, it requires the payoff scene where the hero or heroine gets burned at the stake. This is the template that has reaped such a rich harvest with Joan of Arc, John Hus, Thomas Cranmer, the Knights Templar and that old standby, Savonarola. In a pinch – say, in the case of William (Braveheart) Wallace – the tried-and-true technique of hanging, drawing and quartering will do, as will more traditional methods such as flaying, stoning, beheading, impalement and crucifixion.

But if an author gets to the end of his narrative and the shadowy medieval figure he is attempting to rescue from putatively undeserved oblivion fails to be set ablaze, the historian finds that he has backed himself into a real corner. Nobody remembers Custer if he doesn’t wind up dead at the Little Big Horn. Nobody remembers John Wilkes Booth if he doesn’t shoot Lincoln. And in a medieval setting, the formula for achieving immortality is unforgivingly rigid: No flame, no fame.

Stephen O’Shea recognizes that he has given himself a tough nut to crack in The Friar of Carcassonne. The book is largely the saga of Franciscan brother Bernard Délicieux, a courageous civic leader who laboured mightily to lift the yolk imposed on the people of southwestern France by the Inquisition in the late 13th and early 14th century. Délicieux is a heroic figure, to be sure, and his tale is well worth telling, but perhaps not at book length. Since his revolt against the Inquisition, which was led by the remorseless Dominicans, mostly consisted of legal squabbles, audiences with the king of France and ceaseless litigation, this book has a jarringly Jesuitical flavour.

Click here to read this review from The Globe and Mail