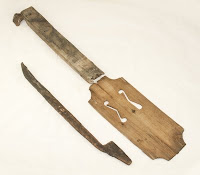 Previously unseen artefacts recovered from Henry VIII’s flagship have been revealed by the Mary Rose Trust to launch its first ever public appeal to help fund an ambitious new £35 million museum project.

The extraordinary Tudor items – which include a fiddle complete with its bow (Europe’s oldest example); a beautifully preserved leather ‘manbag’, the height of Tudor fashion; and the giant wooden spoon used to stir the crew’s porridge pot – have been hidden away in the Mary Rose’s reserve collection due to a lack of display space. They have been brought out of storage to highlight the need to hit the Trust’s funding target for the new museum project and through it to secure the future of the Mary Rose.

The Mary Rose was an English Tudor carrack warship built in Portsmouth in 1509-1510. After serving for over thirty years, she sank in the Solent during an engagement with the French fleet on 19 July 1545. The ship was rediscovered in the 1970s and the surviving section of the ship was raised in 1982. The wreck is considered a major archaeological source for English maritime and military history.

To mark the 500th anniversary year of King Henry VIII’s accession to the throne and of his commissioning of the Mary Rose, the Mary Rose Trust, the charity preserving the ship, is launching the Mary Rose 500 public appeal (www.maryrose500.org) The appeal is seeking 500 individuals, schools, businesses and organisations to come on board and symbolically become the ‘new crew’ of the Tudor warship.

Each new crew member will pledge to raise £500 towards the appeal’s £250,000 target, which will contribute to the final £1 million public appeal total to help fund the new purpose-designed and built Mary Rose Museum. The new museum, scheduled to open in time for the London Olympics in 2012, will complete the preservation of the wreck of the Mary Rose and reunite the great ship with thousands of hidden treasures that have never before been displayed in Portsmouth Historic Dockyard, the Mary Rose’s home.

Rear Admiral John Lippiett, Chief Executive of the Mary Rose Trust, said: “The importance of these Tudor artefacts, many of which we have never had the space to put on public display, cannot be underestimated. Nowhere else in the world is a single moment in Tudor life captured as it is with the Mary Rose.

“Although significant funding has been raised, and work on the new museum has already begun, the project cannot be completed without financial support from the public. Now is the time to help us secure the future of Henry VIII’s favourite ship for generations to come.” 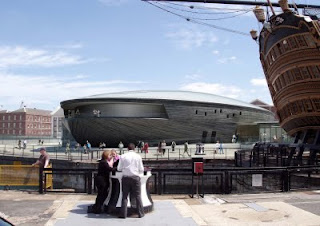 The new building housing the Mary Rose’s fully preserved hull and her artefacts will be a finely crafted, wooden ‘jewellery box’, clad in timber planks. It will replace the current temporary museum located 300 metres away, which has space to display only one twentieth of the 19,000 fascinating artefacts recovered with the Mary Rose.

An extremely important £21 million Heritage Lottery Fund award was confirmed earlier this year, with the Mary Rose Trust charged with raising an additional £14 million to complete the project. Approaching £10 million has been raised so far towards the £35 million goal.

Rear Admiral Lippiett continued: “The temporary structure currently around the Mary Rose has been renovated twice, but cannot be repaired anymore, while her wonderful artefacts are located in a separate building, out of their true context. It is time for the Mary Rose to have a properly designed, purpose built home that brings together the ship and her fascinating relics.

“With the help of the new crew of the Mary Rose, who symbolise the 500 members onboard when it sank in the Solent in 1545, we are about to write the final chapter in an extraordinary story that began with her raising from the seabed in front of a worldwide television audience of 60 million in 1982.”

Although the ship hall is temporarily closed, during the construction of the new museum, the existing Mary Rose Museum, located separately, remains open throughout the construction period to offer an amazing visitor experience including new exhibits and more than 1,000 of the finest preserved artefacts recovered from the site.