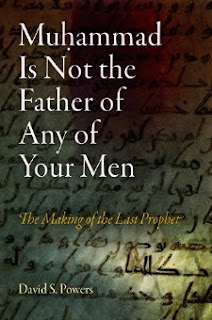 A new book about early Islamic society suggests that their was a slight alteration to the Quran in order to resolve a theological dispute between Muslims in the first century of the religion.

Muhammad Is Not the Father of Any of Your Men: The Making of the Last Prophet

, by Professor David S. Powers of Cornell University deals with an issue that emerged in Islam after the death of Muhammad - was he actually the last prophet.

In an interview with Rorotoko magazine, Professor Powers says. "I attempt to shed light on the emergence of this key theological doctrine and to show how the Islamic foundation narrative was constructed in order to assure its integrity. Specifically, I focus on the intersection between the theological assertion, on the one hand, and the collective memory of the early Muslim community, key legal institutions, and the text of the Qur’an, on the other."

His research revolves around the word kalala, which in Arabic means a kind of family relative. This phrase is used in the Quran in a section on inheritance. When Professor Powers examined an early manuscript of the Quran with infra-red and ultra-violet light, he discovered that this word was originally kalla, which means daughter-in-law.

Professor Powers notes how important this research might be: "it is a fundamental tenet of Islam that the Qur’an always has been, and must remain, immune from textual distortion. From this tenet it follows that the text of the Qur’an, as it has come down to us in the 21st century, is identical in all respects to the revelations received by Muhammad over a period of twenty-three years between 610 and 632 CE. The notion that the early Muslim community might have revised the text of the Qur’an is unthinkable, not only for Muslims but also for most Islamicists—including, until recently, myself. This unthinkable notion is one of the central concerns of my book."

From there, Powers pieces together a theory that the word was changed by the early Muslim community to help sort out the issue of whether or not Muhammad was the last prophet, and if he was, could he also be a father. The story also involves his adopted son Zayd, who has usually been considered a marginal figure in Islamic history. Powers, on the other hand, believes that 'apart from Muhammad himself, Zayd was the most important figure in the early Muslim community."

Click here to read the full interview from Rorotoko