Archaeological News from Jordan and Syria

Through serene olive and fig groves and cow farms near the Jordan-Syrian border runs one of the last remaining roads of the once-proud and mighty Decapolis league.

In the olden days, echoes of the rippling Yarmouk River and green pastures would have welcomed visitors to the vibrant ancient city of Abila, a host of civilisations since Neolithic times.

Now the quiet agricultural village of Qweilbeh, one of the lesser-known Decapolis cities, is revealing more and more secrets about Roman Transjordan to archaeologists.

Dating back to the Neolithic Age (8000-4000 BC), the city had consistent settlement through the Iron Age up to the time of the Umayyads.

Despite its vast time frame, the ancient city reached its peak during the Roman and Byzantine periods, becoming a centre of learning, trade and culture.

Despite its relative size, and the important role it would have played during the Decapolis days, little has been written on Abila and the lives of its inhabitants.

In the first century AD, the historian Josephus Flavius mentions the city as being conquered by Antioch along with Gadara, modern-day Um Qais. Roman commander and historian Pliny the Elder also mentioned the city when recounting the Decapolis cities in 77AD.

Teracotta figurines and other findings indicate that in Hellenistic period, inhabitants may have worshiped Dionysus, the god of wine, according to UNESCO.

The remains on Tel Abila, archaeologically the largest portion of the site, house a series of tombs including columbarium, sarcophagi and painted graves dating back thousands of years.

A basalt road leads visitors through a mosaic-laid Roman plaza and theatre, where a Roman bridge across Wadi Qweilbeh and basalt and limestone columns dot the countryside.

Built into the hillside of Abila is what is believed to be the remains of a theatre, a sign of the city’s wealth and culture. The theatre was a central feature of the Decapolis cities, staging theatrical and musical performances.

Abila, along with Jordan’s other Decapolis cities - Gadara (Um Qais) Pella, Gerasa (Jerash) and Philadelphia (Amman) - made the Kingdom a centre of trade and power in the ancient world.

Nearby Scythopolis, Damascus, Hippos, Dion and Kanatha are believed to constitute the remaining cities of the league, established under the Roman general Pompey.

During the Byzantine period, Abila experienced a renaissance, with several churches built across the site, an indication of considerable wealth.

According to archaeologists, inscriptions at the site indicated that Abila even had a bishop in the mid-sixth century.

The centrepiece of its attractive location was an abundant supply of water, particularly the perennial spring of Ain Qweilbeh, whose gentle brooks flow into the Yarmouk River and eventually to the River Jordan.

Excavations over the last two decades have revealed a large water catchment system and tunnels, presumably constructed during the Byzantine period to channel water to a cistern or storage vault under the church building.

Next year, teams headed by Brown University will excavate two of five Byzantine churches, the Roman bridge and an Early Bronze period area.

Currently, the Department of Antiquities and the Saint Louis Covenant Theological Seminary among others are working to restore the major monuments, improve signage and prepare walking paths.

The ancient city has even been added to the list of tentative World Heritage Sites, in hopes of preserving and raising its profile.

Until then, all that remain of the glory of the Decapolis columns and roads are, lying amongst grazing pastures and farm tractors. 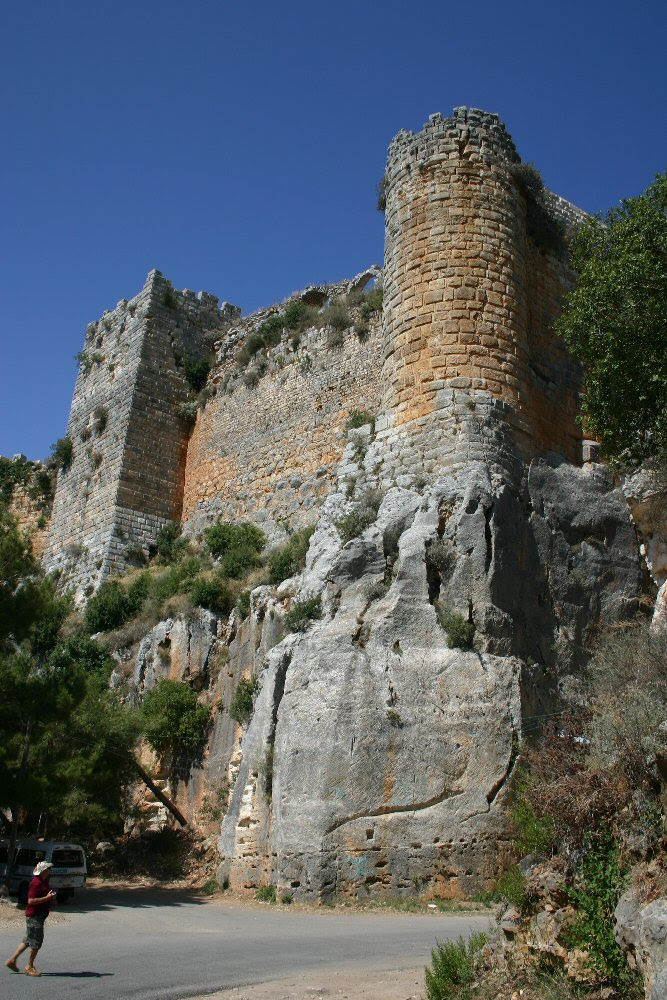 Meanwhile, archaeological work has now begun at Saladin's Castle (Qal’at Salah El-Din) is one of the largest and most prestigious castles in Syria.

The site of the castle had strategic significance since the time of the Phoenicians, who controlled it until the arrival of Alexander the Great in 333 BC. The Byzantines also held it for centuries and built its first defenses. The Crusaders captured it in the early 12th century and built the majority of the castle's structures that are seen today. It was claimed in 1188 by Saladin (Salah El-Din al-Ayyubi), from whom the castle earned its current name.

A French-Syrian expedition began surveying the lower portion of the castle, uncovering the foundations of a church and new historic information from ceramics. The expedition is still working at the site, and the results of their findings will not be announced until their work is concluded.

The Lattakia Department of Archeology is working diligently to restore and repair the Castle. The most significant restorations during the last ten years include the Byzantine wall and its towers, parts of the second and third towers, the arches on the eastern side and the stables.

The Department also restored the 28-meter obelisk, the wall at the southeastern corner of the Castle, the Byzantine church and the Byzantine beacon.

The Aga Khan Development Network also restored the Ayyubid part of the castle, which contains the mosque, the minaret, the school, the Ayyubid castle, and the Qalaun bath house.Saladin's Castle was included in the World Heritage List issued by the UNESCO's World Heritage Center in 2006.