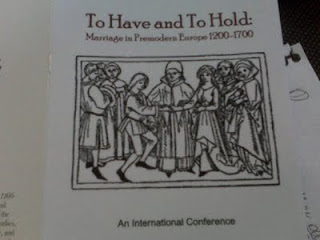 The University of Toronto held a two-day history conference, which ended yesterday, entitled "To Have and to Hold: Marriage in Premodern Europe (1200-1700)".

Over 100 people attended the conference, hearing papers on a wide range of topics related to marriage in the Middle Ages, Renaissance and Early Modern periods. Some of the papers dealt with the marriages of clerics during the Middle Ages, marriage practices in minority communities throughout medieval Europe, and reports on interesting marriage cases.

Medievalists.net was on hand and interviewed several speakers. The interviews will be posted to our website over the next couple of weeks.

Our first video is an interview with Professor Konrad Eisenbichler, who was one of the organizers of the conference. We asked him about why they wanted to do a conference on pre-modern marriage and about what was learned here.

A detailed report of some of the papers given will be added to the website later today.