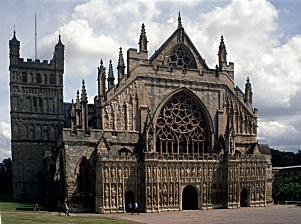 Professor Nicholas Orme, one of the most distinguished scholars in the United Kingdom, has released his latest book - Exeter Cathedral: The First Thousand Years, 400-1550

. It details the history of the one of England's most historic church buildings, which is famous for its vaulted ceiling and its fifty misericords, which date from the 13th century.

Orme, who is Emeritus Professor of History at the University of Exeter, has written dozens of books and articles on medieval children, schools and ecclesiastical history, focusing on the British Isles. This particular work is a more personal endeavor, as ge and his wife, Rona, were married in Exeter Cathedral 28 years ago.

In an interview with the Express and Echo, Professor Orme said, "It all started when I was at the University of Exeter and working on a history of medieval schools. I came to the cathedral to look at their archives, which it turned out are among the best anywhere, even compared to Wells, Salisbury and even St Paul's.

"I would spend afternoons down here and, as with any work, there has to be an element of altruism, of trying not to bore but to communicate. I thought it would be a useful job to bring this information to the general reader and if I didn't, who would?

"Anyone can read the archives. But they are written in Latin, in medieval handwriting on parchment that is thin and perhaps in bad repair. And more importantly, they do not mean anything unless you know what they are related to, and their context. There is a terrific amount of knowledge in the archives above the refectory.

"Most cathedral histories are on an architectural theme but this book is not all about what, but why? Why is it like this and why is it here?

"Why not Crediton or Morchard Bishop, perhaps the geographic centre of Devon, or Plymouth? And the answer is of course down to non-Christians — the Romans. They chose Exeter to be the principal place in Devon. Exeter mattered and in ecclesiastical terms Crediton didn't. It was the ecclesiastical equivalent of Marsh Barton — although I may get in trouble with the people of Crediton for saying that.

"When King Athelstan arrived in November 932 as King of the English he brought with him all three Welsh princes, every English bishop and the 30 leading nobles. It stamped on the city the royal mark, royal authority and royal power. Exeter was a Royal Cathedral and it was until Edward the Confessor made the sacrifice and gave it to the church."

Professor Orme, in speaking about the tough economic conditions that many churches in Europe face, adds, "we are fortunate in Exeter that the cathedral is in excellent condition. There has been a great surveyor operating here for the last 20 to 25 years. Everything is monitored. There is an on-going programme of work. It is run just about as well as it can be run. But that will always be expensive to do."

The book was published by Impress, with the support of the Friends of Exeter Cathedral, Devon County Council and Exeter City Council. Orme, who retired in 2007, says, "this is probably my last shot and the culmination of years of work. I might have another more academic work to come, but this is it for now."