Who was the mysterious Ælfgyva in the Bayeux Tapestry?

A new theory has been put forward on a mysterious scene in the Bayeux Tapestry that appears to show some sort of sexual scandal that involved a woman named Ælfgyva. Joanna Laynesmith, a medieval historian from the University of Reading offers two possibilities in a new article that appears in the October issue of History Today. 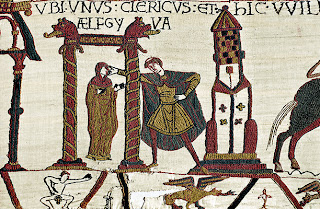 In trying to understand ”the million dollar question” as Laynesmith puts it, several different explanations have been attempted.  Laynesmith believes that this Ælfgyva was most likely Emma, who was the wife of two Anglo-Saxon kings - Æthelred the Unready and Cnut, and was the mother of two more – Harthacnut and Edward the Confessor, or that it could be Ælfgyvva, the first wife of Æthelred.